Two weeks shy of a year and I finally achieved what I set out to do with those little fuzzy chicks we brought home last March. This is the first time ever I've gotten this variation of colors all at one time. I love it!
We all have different life goals. I realize mine are not normal, but they are goals. And I can check this off the list. 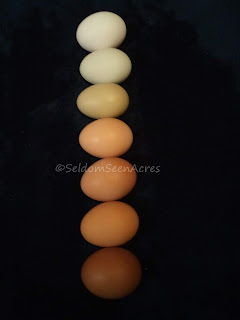 I took some time off and now I'm going to attempt to get back to this. To say many things have changed in the last 3 years would be an understatement!
I got married, took my older boys out of the public school they were in and started them in an online cyber school, downsized our 'livestock' to just a few animals and had another baby boy. Of course there has been a lot of other thing, good and bad, that have happened but I'll stick to the basics for now.
After a hiatus it's time to start again. I'm sure I've lost most of my followers during the time I've been gone but maybe there are a few of you who are still around and interested in what is going on here at Seldom Seen Acres.
Last fall and early into the winter we lost all but one hen and one rooster to predators. We decided to restock and get 30 new hens. We had decided to buy the chicks through our local Tractor Supply instead of ordering them through the mail for because the weather is still so unpredictable and I didn't want babies in the mail during freezing temperatures. When we called to see when TSC would be getting their first shipment of chicks they said they would be getting them starting the last week of February. I'd already decided that I wanted to get breeds of chickens that will lay a variety of egg colors. Not sure why but I love when I get a mix of browns, white, and blue or green eggs. Thinking we were only getting 15 chicks this week and 15 next week - depending on the breeds the store had available, I spent Thursday afternoon setting up my little makeshift brooder. When we got to TSC, much to my surprise,  there were nine different breeds of chicks there, including Ameraucana and Leghorns. So I could get all three colors of egg laying chicks TODAY!!! What?? that is not what were had in mind when we left the house, Hubby and I agreed to just get all of them today instead of splitting up the orders. Okay that's settled. Now which breeds besides the Ameraucana and Leghorns do I want? The options were Amber-link, Black sex-linked, Black Jersey Giant, and Isa Brown (all pullets) and there were also Buff Orpington, Barred Rock and Cornish Rock straight run chicks. Oh my! If you know me you know I have a hard time with snap decisions, I need time to think. While I was thinking Hubby wandered off to find some other things that we needed. When he came back I told him that I had decided to get 5 of each of the pullets. That would be the 30 we agreed on. But.... they have Orpington and I know we love that breed. Since we only have one rooster we decided it wouldn't be a bad thing if we ended up with at least a couple more so we got 5 of each of the Orpington and Barred Rock as well as the others... Yes, that is 40 baby chicks! When we left the house we had agree on 15 for today... oops. Needless to say, I had to revise the brooder when I got home. Instead of the little brooder box I had set up we had to use the small stock tank.
The store also had ducklings and I didn't bring any of them home so I think I'm did good. 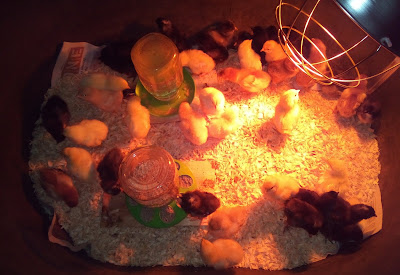 The days of school work getting sent home to be finished, because someone was to distracted during the lesson to get his work done. When we sat down to do his home work he refused to do this page. His reasoning was that he already corrected the mistakes, so He feels he did it and the changes he made are correct so no need to rewrite the whole thing.
No amount of incentives are getting him to change his mind either.... I'm about to lose my mind!!!
Have I mentioned lately how much I hate homework, especially if it was something he was supposed to have done in school?? He brings home more work that he didn't finish in school than actual homework. 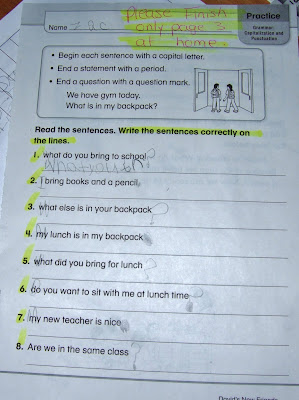 That time of year again...

The Potter County Fair entry forms are due today! Yes, my boys' rabbit and goat form are in, just barely but they are there....lol.... I mailed the rabbit papers yesterday so they could be postmarked by today and hand delivered the goat papers last evening too. Talk about last minute, but if you know me you know that is the way I am.
Now the challenge is to get the boys to not change their minds about which rabbits and goats they want to show between now and fair week. In the last weeks they have changed their minds so many times. I guess that is one of the problems of having so many animals and telling you kids that they have to pick only a few to take to the fair. Trust me folks, the struggle is real. :)
at 11:17 AM No comments:


Almost four months, and you'd think I'd have something to write about... or not?
Wow. I don't even know where to begin, really.
Daisy had boy/girl twins on March 5th. *K* named the babies Dana and Dexter.

Bubbles had twin bucks the next day (March 6th) so in three days we had three sets of twins. 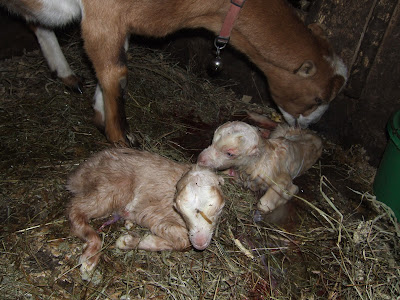 Of course both does had their babies at night so no good pictures or video could be taken right away. The lighting in the barn is horrible even in the daytime.

I bought *K* another copper satin doe rabbit to replace the one that died a few months before. Her name is Cindy. She is much larger now but this picture is from the day I bought her. 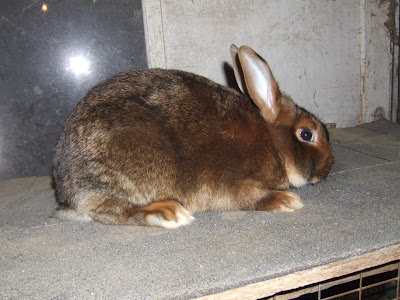 I bought another milk goat. Her name is Willow and she a half sister to Bubbles. 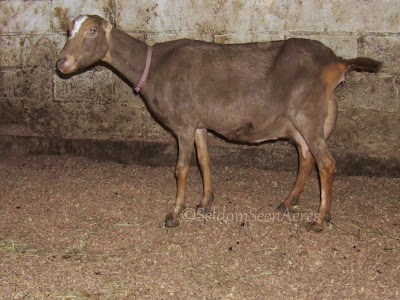 Then this happened on April 4th! Yeah, crazy, right? But such is life here in North Central Pennsylvania. 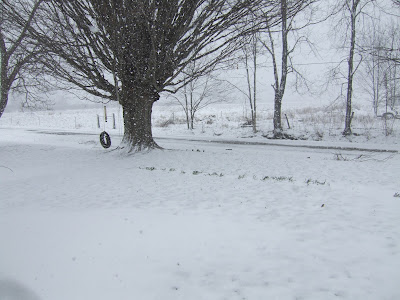 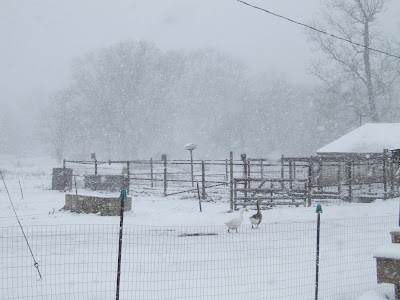 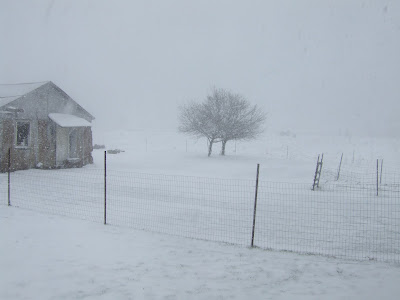 ... and did I mention that this happened at some point? No, probably not! Kittens! They are cute but I really could have done without. 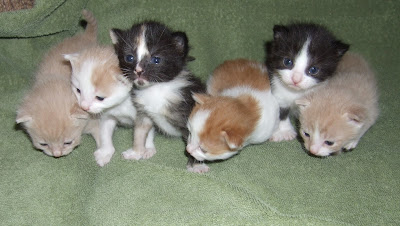 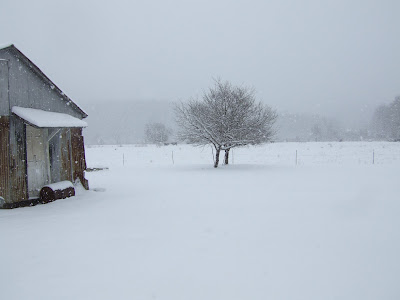 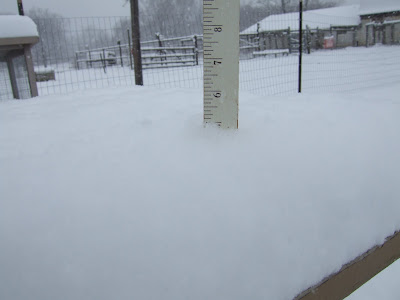 We had baby bunnies!

The baby goats played in the yard...

Buttercup had a baby boy that *Z* named Buddy, on April 16th. 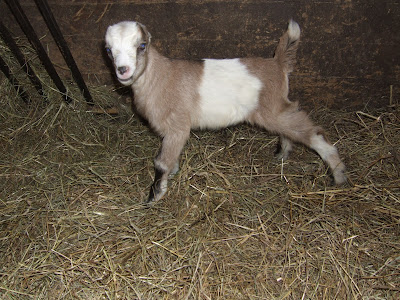 So, as you can see there is a whole lot of nothing going on here. Oh, and we built more garden boxes and got the garden area fenced in. YAY! Sounds really nice but I still haven't gotten anything planted in the boxes.
Life just isn't turning out the way I had planned it, so long ago. It has taken a detour recently. As much as I've always felt I am raising my boys alone, even with their father living here, it is real now. I've known it was coming for at least the last two to three years so it isn't too much of a shock. I can honestly say it doesn't feel much different because he was never present anyhow. He wasn't really interested in any of the projects I was working on or even anything the boys wanted to show him or do with him. Financially things are going to be a little more stressed until I figure something out, but that department has always been stressful anyhow. At least now I know I'm the only one who will be spending, so it'll be easier to save for something, instead of hoping that he didn't spend all of the money I was trying to set aside for something we needed. Its going to take some getting used to but we (the boys and I) will be okay. If any of you have any suggestion on things I can do to make money from home, please let me know.

The full circle of life here on the farm today...

This morning I started the day mentally preparing myself to send the last of our pigs to the butcher. All the other times that we've sent pigs to be processed, I haven't really thought too much about it because the intended purpose for raising those pigs was for meat. This time, we are sending two sows that we kept for the purpose of raising babies. The thought of eating them never crossed my mind until recently when our financial situation, unexpectedly, changed. Red is three years old and Peaches (out of Red's first litter) is one and a half years old. They were both really good moms and had big litters (13 to 16 piglets each), so my heart is heavy today as I prepared to send them off to be processed. Once they are loaded onto the trailer and off the property, I will be okay. I will enjoy the meat just as much as I have any other pigs we've raised.
Soon after starting my morning chores my heart lightened a little because I realized that Shay (one of *Z*'s goats) was definitely in labor and we would have new babies in a few hours.


Actually it didn't even take two hours. Within an hour of me noticing that she was in labor she delivered a set of twins. A buck and a doe.

When it came time to load the pigs, Red decided she really didn't want to go for a ride. She squeezed through between the barn door and the trailer and went for a walk about!


Yep there she goes back the other way!! I was half expecting to see *T* following along behind her with a bucket of feed...

I was not helping but was told that Red did NOT want to get in that trailer, and it took quite a lot of convincing before she finally did get in.

I guess Peaches wasn't nearly as hard to load.

So, with the pigs on their way down the road, it is time to focus on the new additions. Meet Sage and Sarah!

I've been looking for the ducks' nest, but couldn't find it. The way they've been acting I was sure they were laying, but I hadn't seen any eggs. I found their nest! There were three eggs in it yesterday and two this morning. 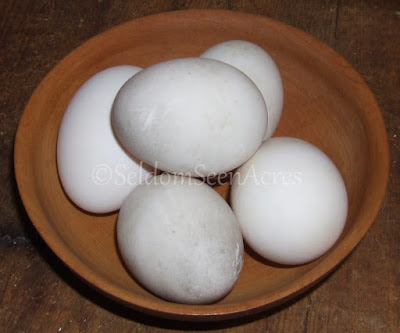 Given the choice of eating duck eggs or chicken eggs, I choose duck eggs.

Promote Your Page Too